Kings of Country In Concert 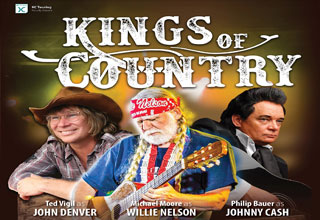 THE KINGS OF COUNTRY.
The "Kings of Country Tour" has been selling out venues and festivals around the World fr the last 20 years . Fresh off their sold out 22-city tour of Australia, Philip Bauer, Ted Vigil and Michael Moore bring the music of Johnny Cash, John Denver and Willie Nelson, respectively, to adoring fans all over the world. These three Vegas stars are considered to be the World's greatest impersonators of country music icons Cash, Denver and Nelson.
WS Holland, the only drummer for Johnny Cash, calls Philip Bauer "...closest to Johnny that I have ever seen."
Ted Vigil the USA's number 1 John Denver tribute Artiste, also performed with the late Steve Wiesberg, John Denver's lead guitar player from 2010 to 2014 who is quoted as saying "Apparently the audience thinks all John Denver tributes look and sound like John. I don't see it. BUT I see it with Ted. A very strong physical and vocal resemblance ... It's Uncanny!
"Michael Moore has been performing as Willie Nelson both on this tour, solo and as the Willie Nelson of the World-famous "Highway Men" Show. His attention to detail and his presentation has garnered him fans from around the World.
This world-famous trio is coming to Ireland and the UK for the very first time in the Autumn of 2020